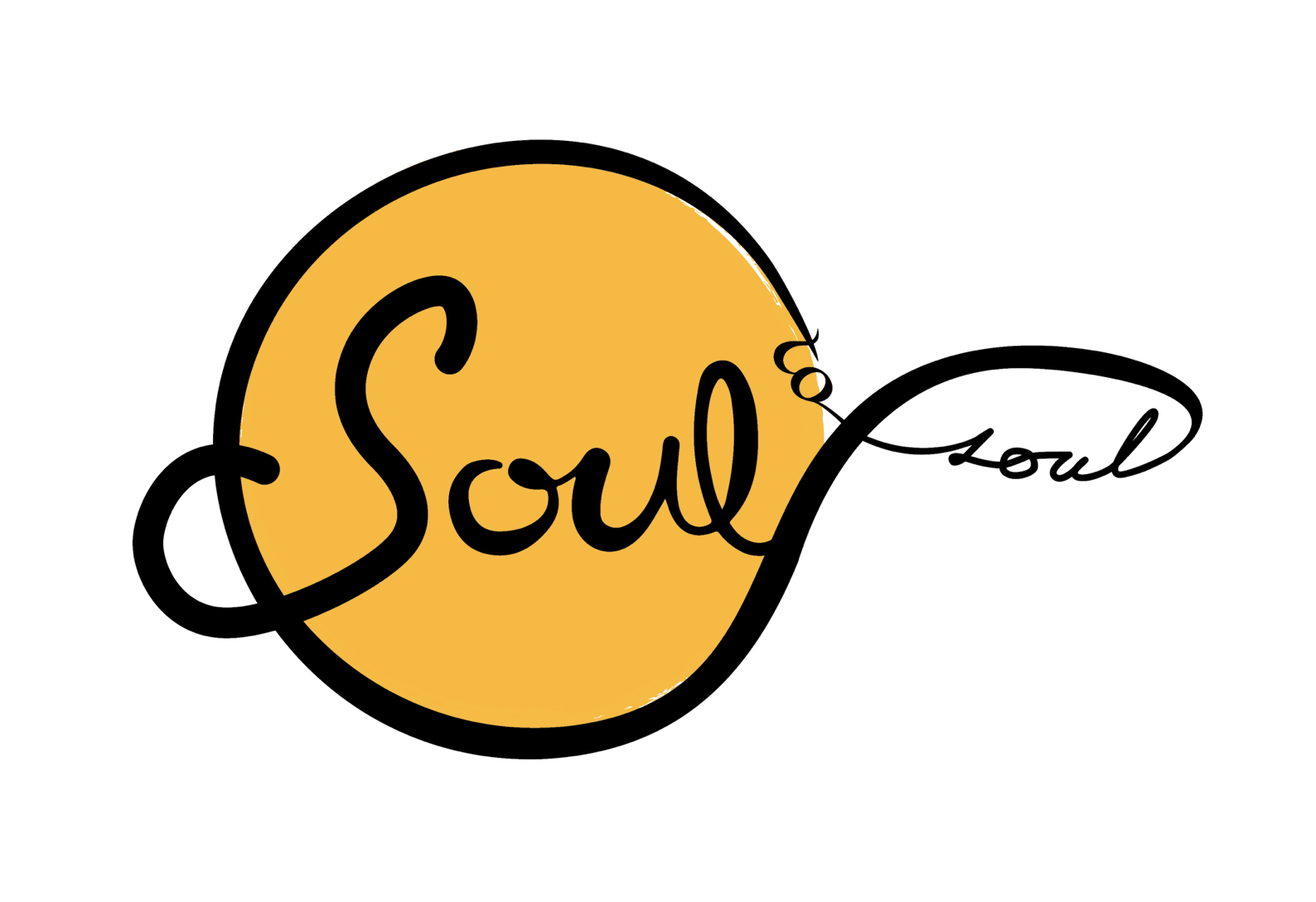 This philosophy is only to be understood by who is pure in heart. Giving up eating meat,
starting to practice yoga and meditating upon the supreme frees you from the material energies, so you can clearly see. 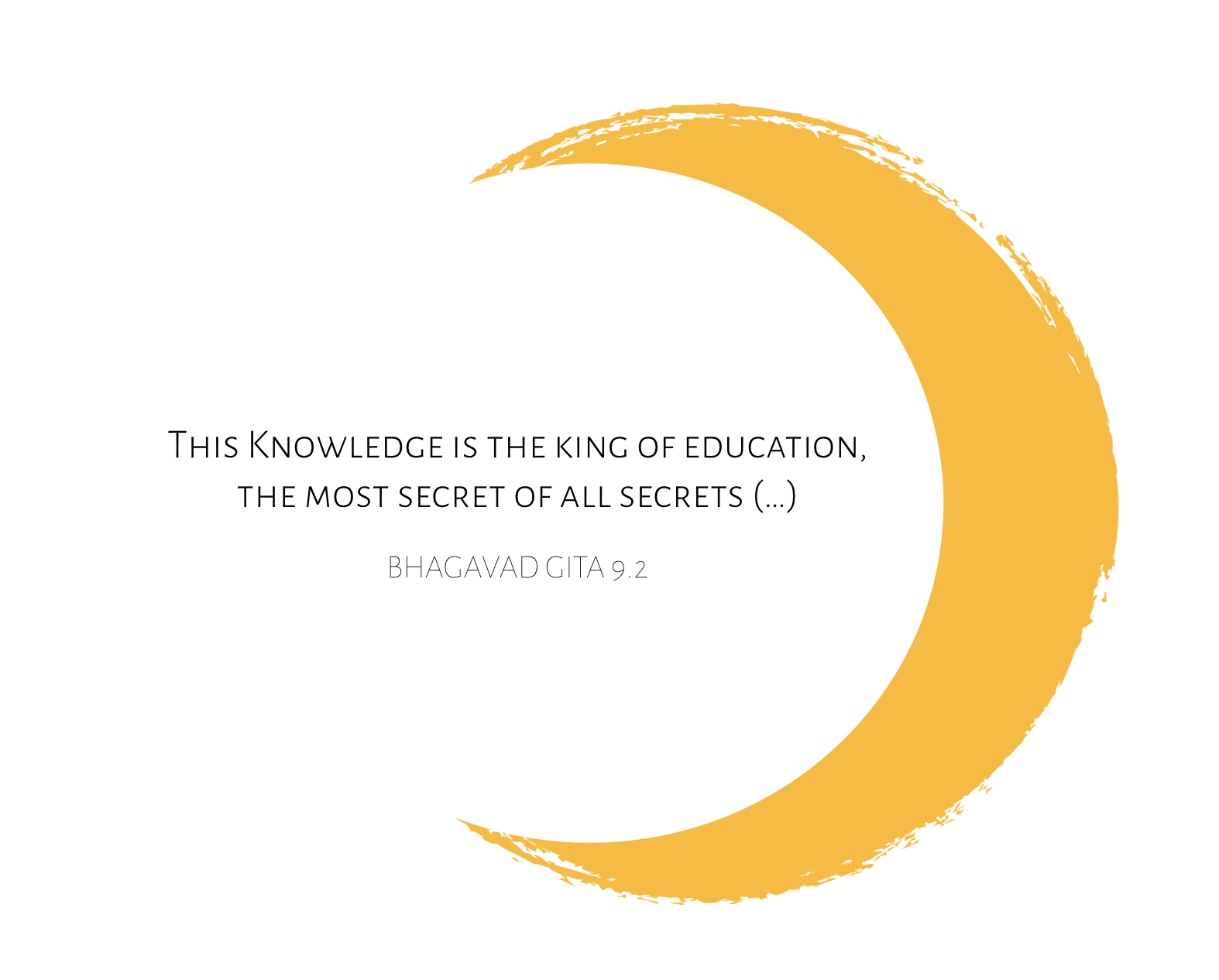 The world we live in is situated in the middle of its universe.
Where the higher planets bring more joy, the lower planets more misery.
And as we experience, in this world, these things are equal.
Happiness is followed by distress and distress again will be followed by happiness.
‍
The world we live on is a material world.
A world where we identify with our bodies, social status, income and wealth.
A world where spiritual qualities and realisations can not be seen anymore,
caused by the dominance of an energy force called maya.
‍
A world were there is only a few teachers left,
educating people about their true nature and their real purpose in life
and giving them, the ability to see.
‍
Being born in the human form of life gives us the chance, to realise ourself.
We are given the intelligence to advance in our knowledge and practice.
‍
The process is yoga, meditation, vegeterianism and spiritual practice.
By practicing these things, we will slowly advance and be able
to experience our true self to see beyond what the average person is exposed to daily.
‍
By realising who we really are, the eternal soul and not the body, everything becomes easy.
The acceptance of the circle of life, old age, disease and death becomes easier.
We will be free from the suffering of this material world, learning, realising and knowing
where we are going next, what brought us here, why we are here,
why certain things are happening and what our true purpose is in life. 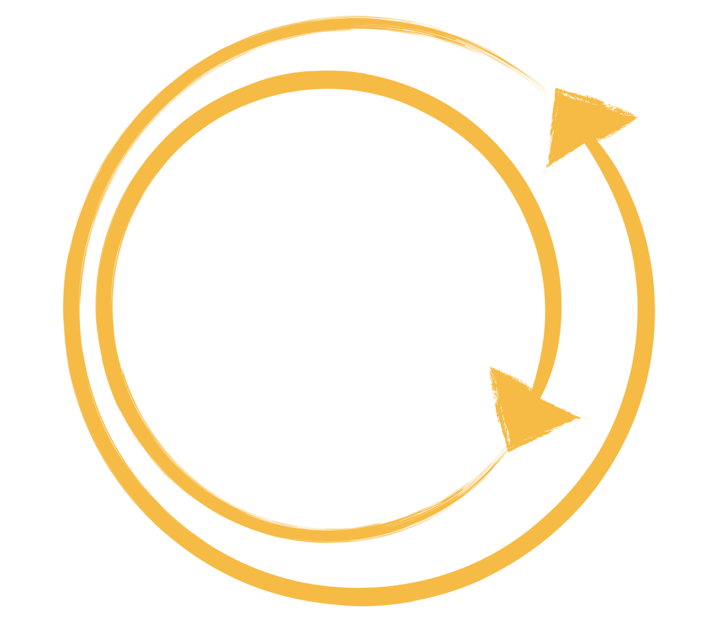 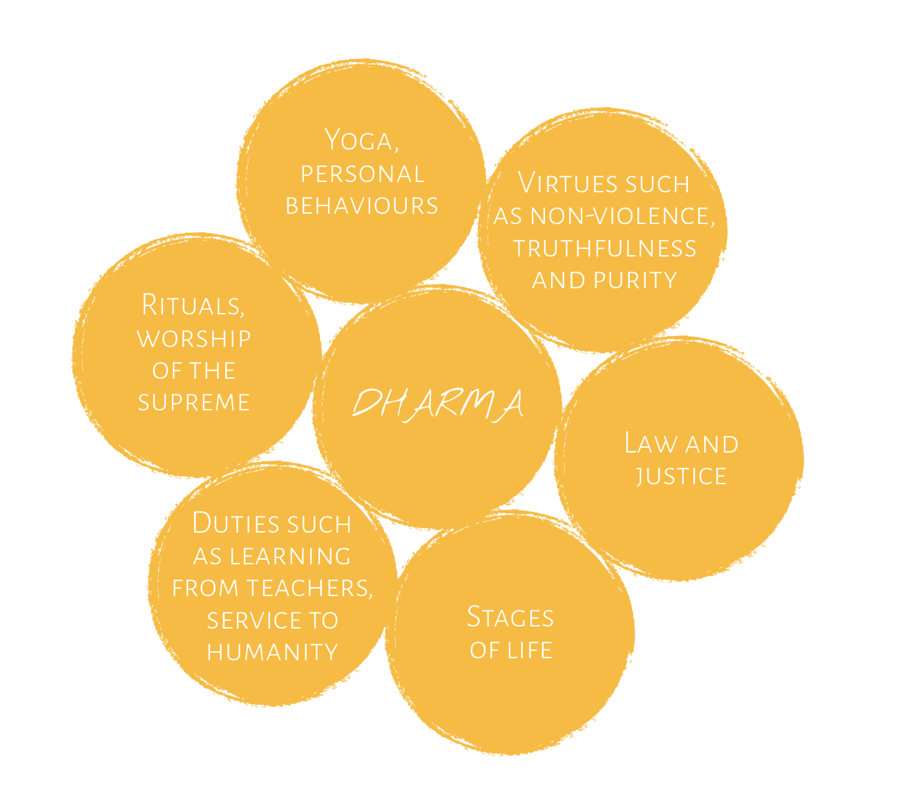 Dharma
Dharma means duty, in particular eternal service nature.
It is about what we do, what we stand for,
what we practice and what we share.
‍ 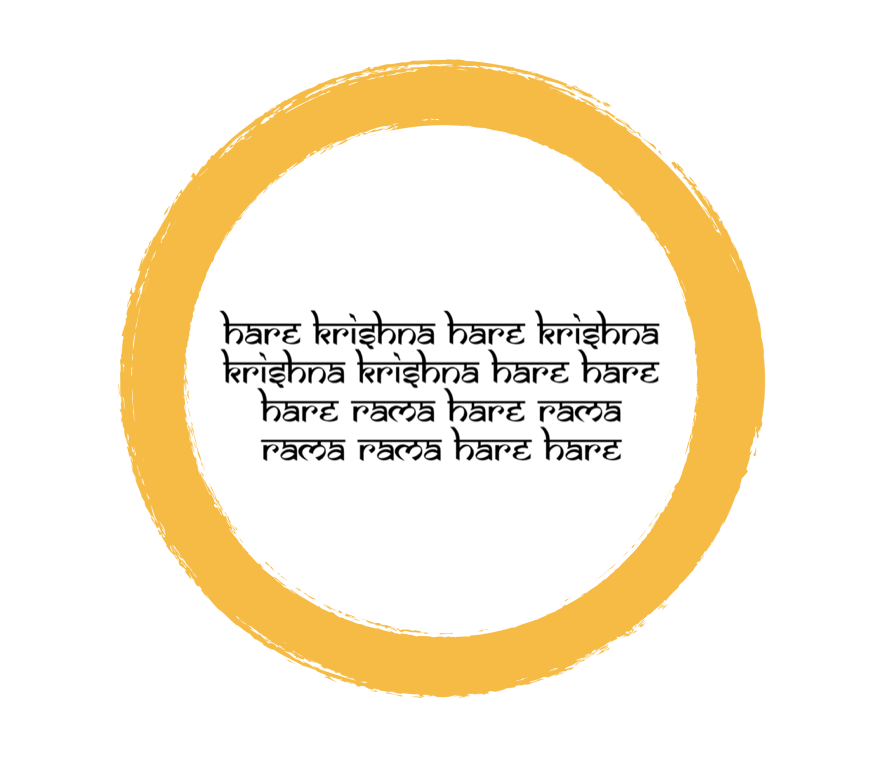 Mantra
A mantra is an ancient vedic hymn repeated to  aid concentration
in mediation through transcendental sound vibration.
There is innumerable mantras with different meanings.

The king of the mantras, that inhabits the benefits of all mantras is the
‍
MAHA MANTRA (great mantra)
(see above)
‍ 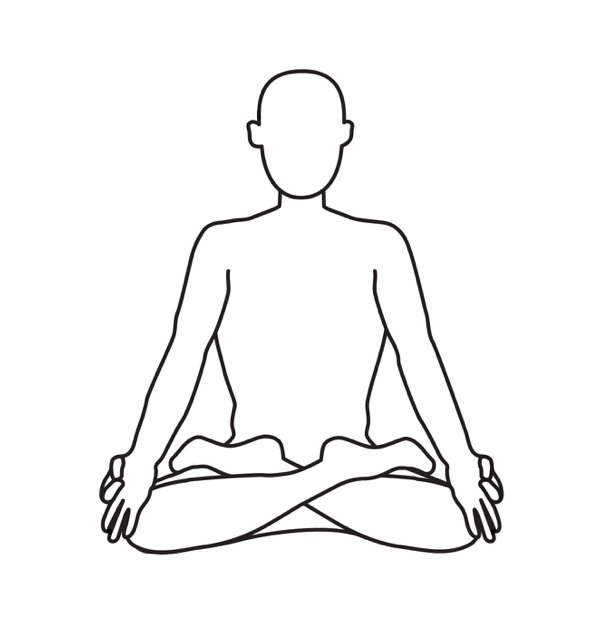 Meditation
Meditation is a practice to attain an inner state
of awareness to intensify personal and spiritual growth.
‍
One way to meditate is repeating a mantra for 108 times (or more).
This is called mantra meditation or japa.

Reincarnation
Whatever we think of when the time has come to leave this body,
will determine what body we will take up next.
What we are thinking at the moment of death is connected
with our experiences and beliefs in life.
‍
According to vedic literature human beings are not always reborn as human beings.
There are 8,400,000 species in this world, according to the vedas.
‍
The living beings of lower species always advance to higher species.
Slowly they are promoted from one species to the next until they reach the human form.
And the human form is meant for self realisation and provides the opportunity
to leave this material world and get reincarnated on a higher planet.
‍ 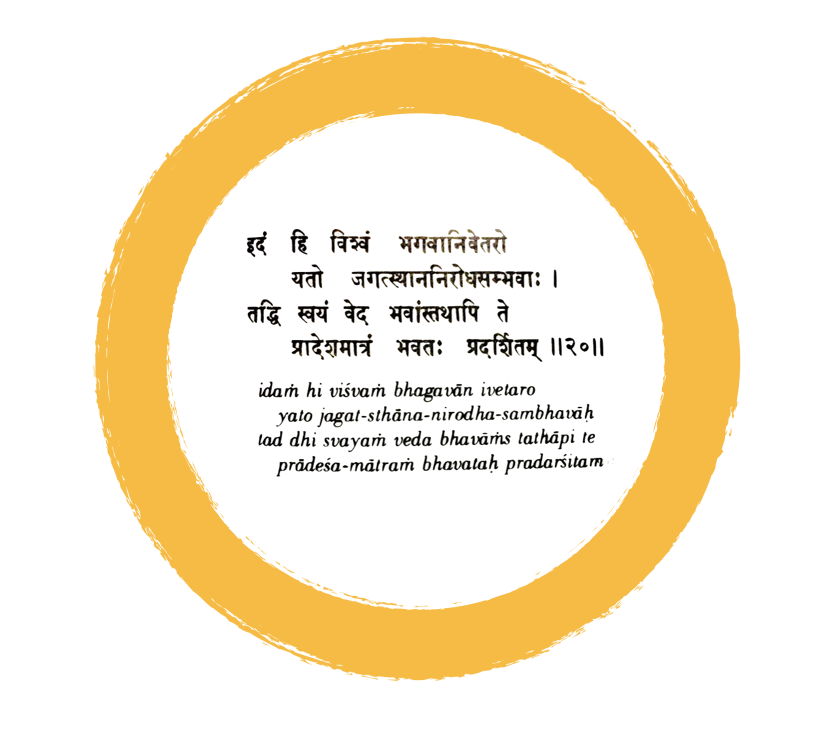 Sanskrit
All vedic literature was originally written in sanskrit.
Sanskrit is commonly not been used anymore as a spoken language,
but can be found in writings, books, mantras and prayers, such as the maha mantra,
srimad bhagavatam and bhagavad gita.
‍ 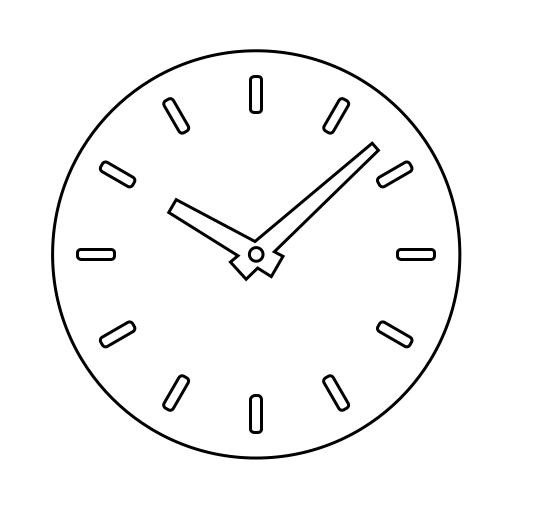 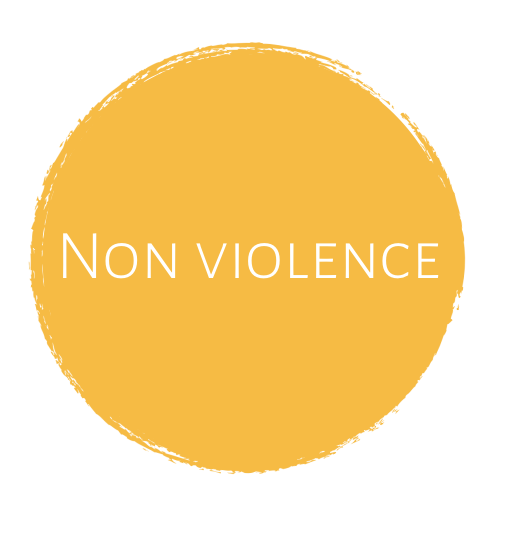 Ahimsa
Ahimsa means nonviolence and is practiced exceptionally in the yogic world.
This includes no meat eating as well as no fish and no eggs.
Milk should be taken only from cows that are protected and cared for.
‍ 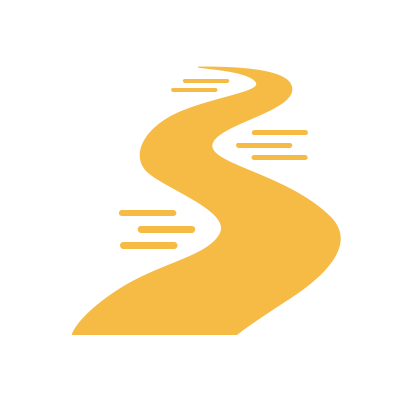 Bhakti Yoga
bhakti yoga is the “Road to Love” and is a main path to yogic enlightenment.
It is considered to be the most direct method to connect with the supreme.
‍ 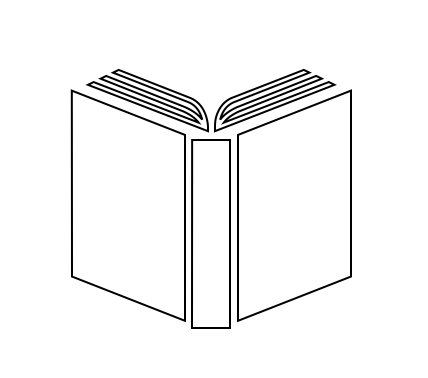 Literature
The main vedic literatures of the gaudiya vaishnava lineage are the bhagavat gita - as it is and the srimad bhagavatam. The bhagavat gita contains 700 verses and is a conversation between the supreme and his eternal friend arjuna. The Srimad Bhagavatam contains 18000 verses and is generally found in a volume of 12 books.
These books are often referred to as the vedas or sastra.
‍ 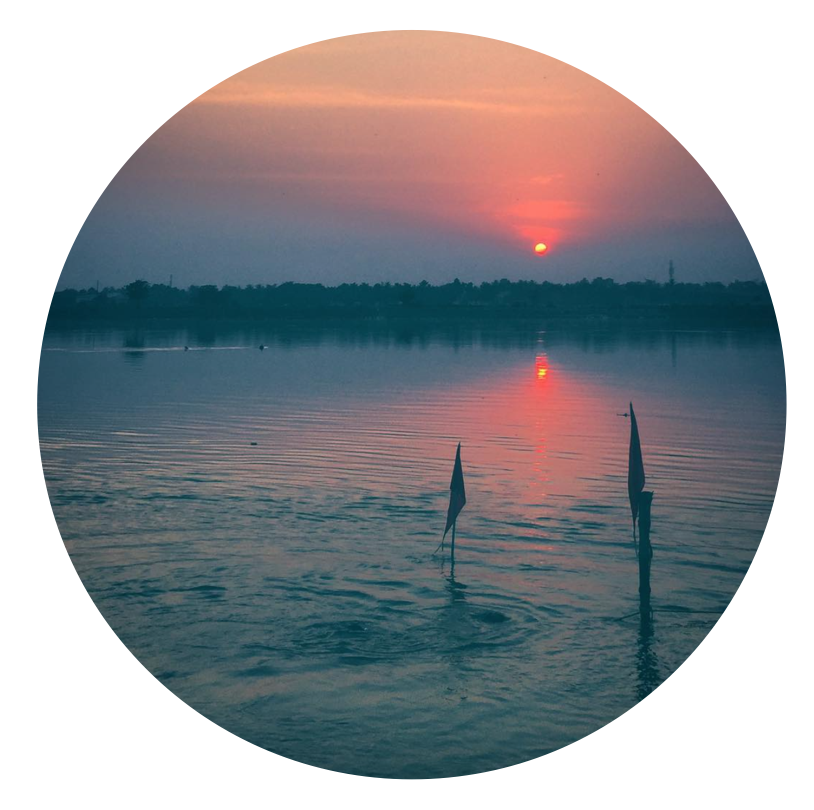 River Ganges
For millennia, saints and sages have bathed in the river ganges,
for as a bath takes any impurities off and is cleansing us from all material contamination.
A bath in the holy river ganges opens up the opportunity to advance in spiritual life.
In vedic cosmology it is believed, that the ganges originates from beyond
the shell of the material world.
‍ 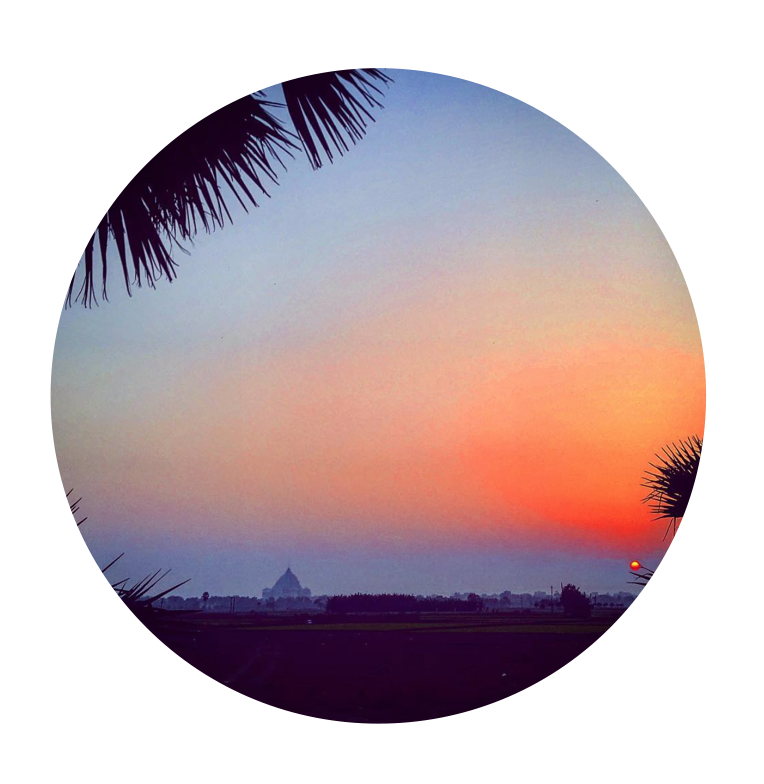 Mayapur
Mayapur is the birthplace of lord sri caitanya mahaprabhu who is an incarnation of the Supreme. This holy place is located on the banks of the river Ganges in west Bengal in India, 130 km north of Kolkata. With its opening in 2022 Mayapur is host to the temple of the vedic planterium (TOVP), also known as Sri mayapur chandrodaya mandir - the rising moon of mayapur - which will be the largest temple in the world, just slightly smaller than the vatikan in rome.
‍ 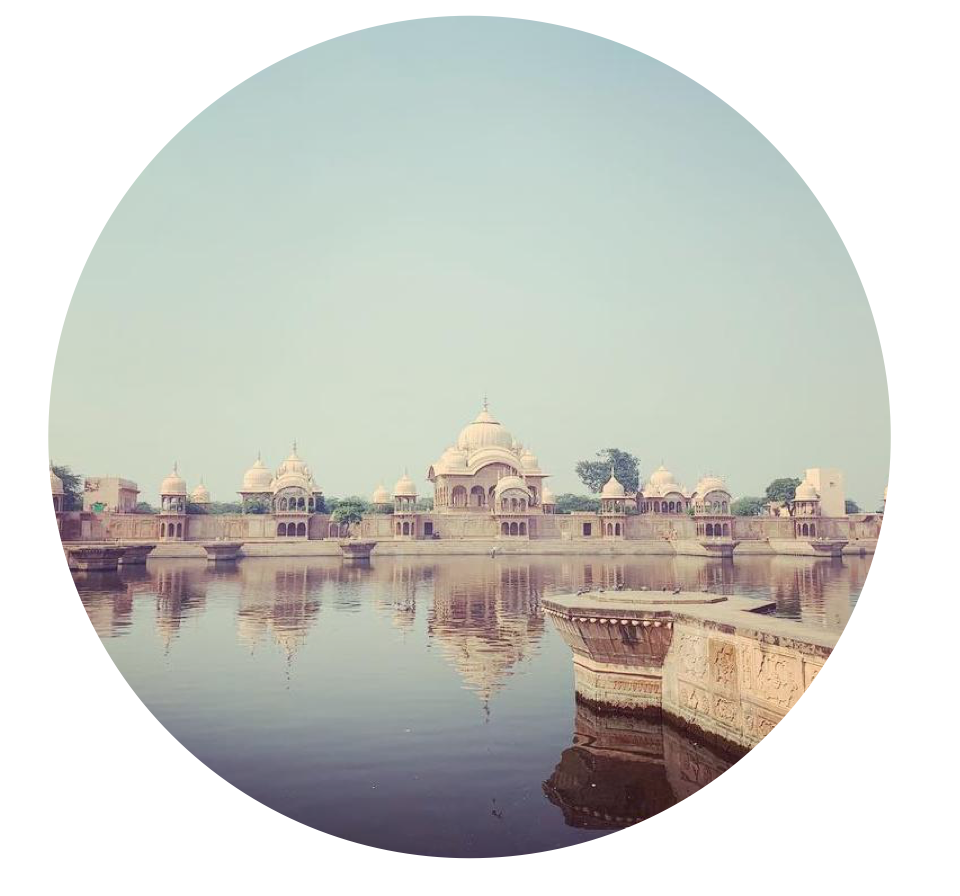 Vrindavan
135 km south of New Delhi in India lies the holiest of places of vaishnava pilgrimages: Vrindavan. Its sand, once walked upon by the supreme itself, is thought to be imbued with love of the divine. Lord Krishna appeared in vrindavan around 5000 years ago.
‍ 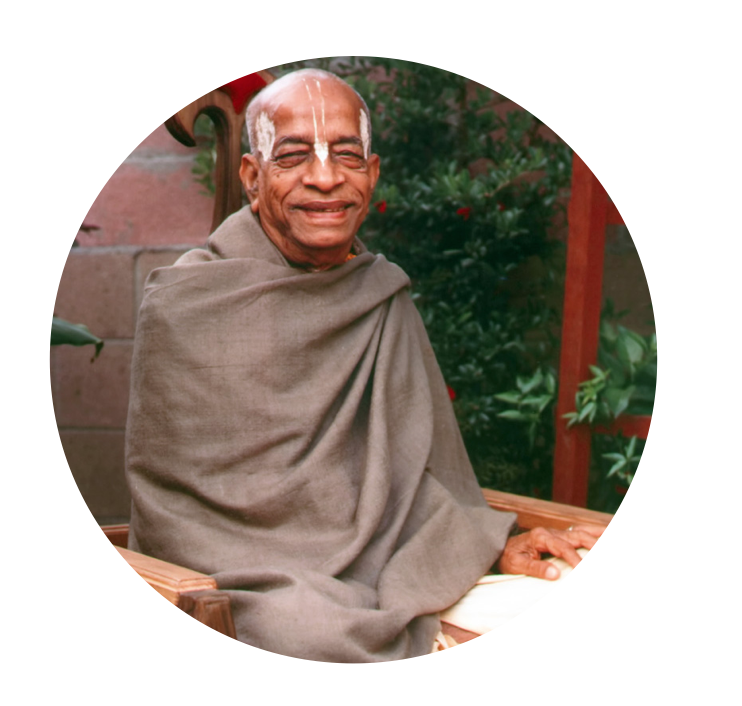 ISKCON
ISKCON stands for international society for krishna consciousness and was
founded by a.c. bhaktivedanta swami prabhupada in 1966 in New York.
ISKCON is host to  over 650 centres and temples and 110 vegetarian restaurants
worldwide with its headquarter in mayapur, India.
‍ 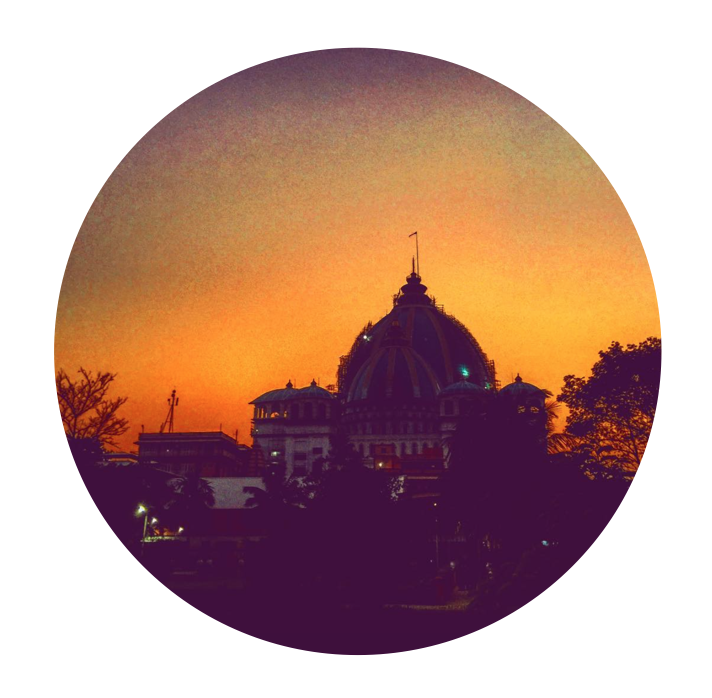 Temple
ISKCON has numerous temples and centres for educational spiritual upliftment worldwide, that are open to people from all ages and religions. The first thing you can expect when visiting a temple, is having to take your shoes off. The temple generally is a place of worship, where you can see deities, attend worship programs, mantra meditations and talks by local and international speakers. Every temple distributes free prasadam (Sanctified food), so you will never go hungry and are given the opportunity to easily connect with people.
‍ 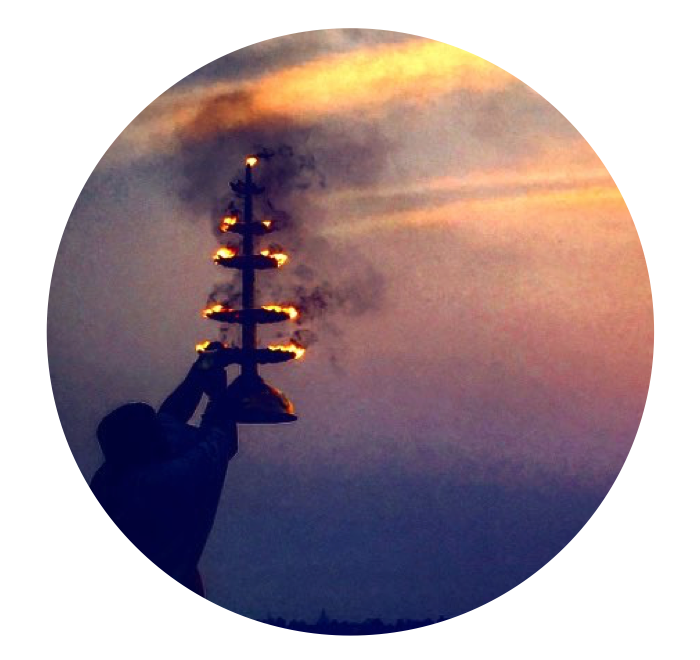 Puja and Arati
Puja and arati are forms of worship, performed at specific times of the day
with different ceremonies and prayers.
‍ 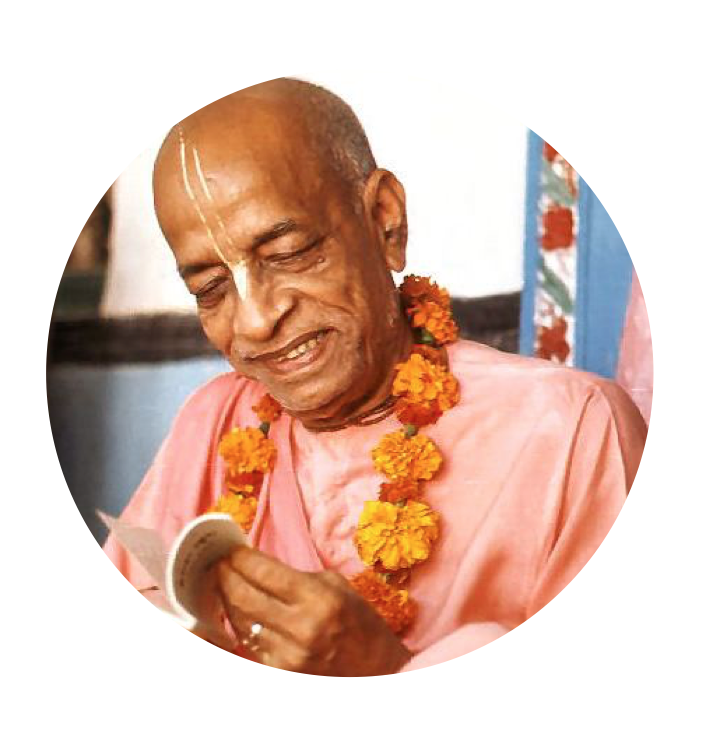 Guru
In the vedic sriptures it is mentioned, that a teacher is required in any area of knowledge. That applies as well for your spiritual life. A guru guides you to advance in your practice from the moment you are ready to start the journey. A guru can be even to begin with just the author of a vedic book that you are reading. 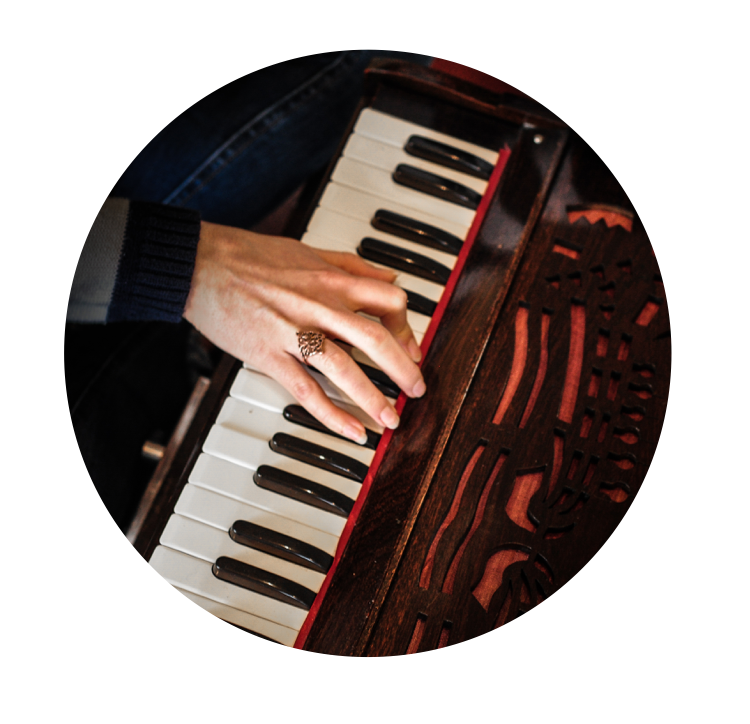 kirtan
Kirtan is a musical call and response form of mantra chanting including a harmonium, a midranga (two handed drum) and kartals (cymbals). Being exposed to the sound of these mantras means to become purified and to start a process of spiritual realisation. Mantras chanted in sanskrit, such as the maha mantra, have shown its effects to the mind, intellect and auditory nerves of those who attend. Often attending a kirtan  is a first step in peoples yogic life and on their spiritual path.
‍ 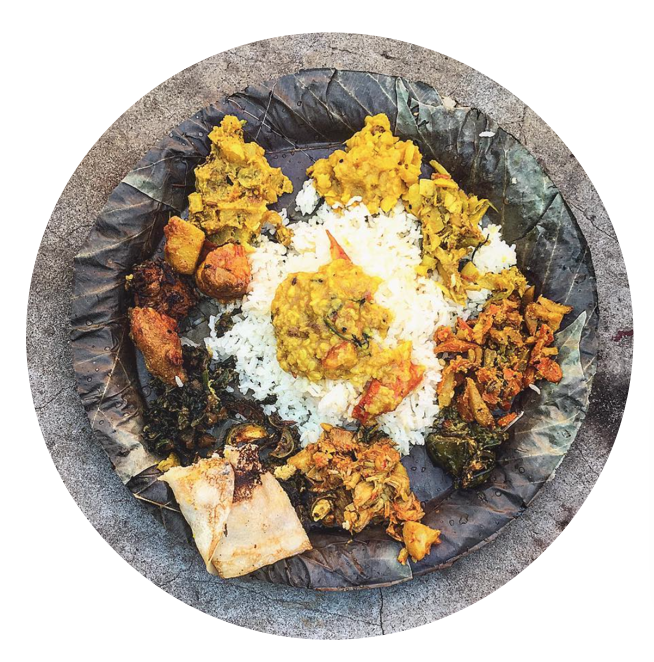 Prasadam
Prasadam is sanctified food. The food is consciously cooked and then offered to the supreme before eating. Eating prasadam brings clarity about reality and advancement in spiritual life.
‍ 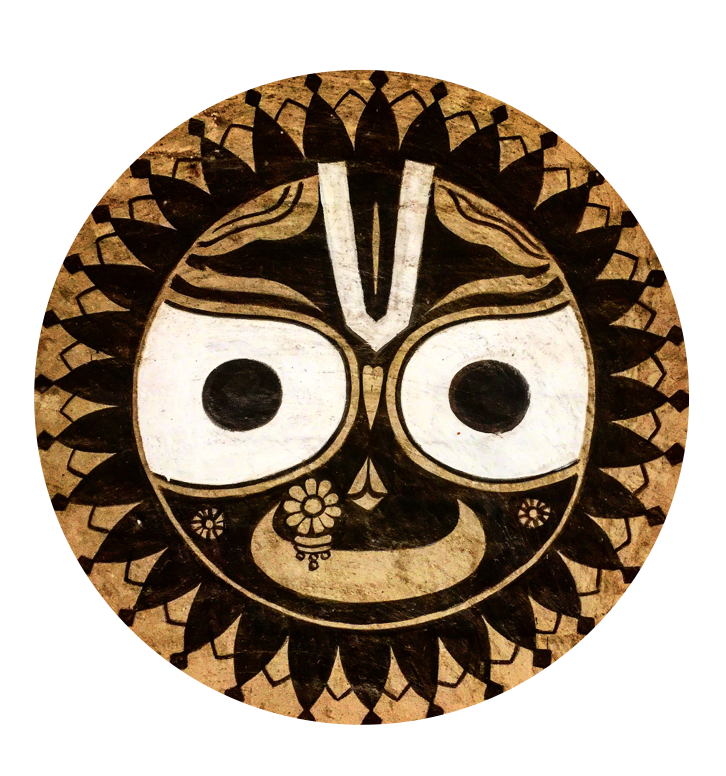 The supreme
the supreme resides in goloka vrindavan, his eternal abode, the highest planet of the planetary system. As it was predicted in the vedic literature, he incarnated in different forms to this world, such as lord krishna, lord jagannath (see picture),even lord buddha and many more.
‍

Vedic cosmology
‍
Learn all about the Vedic cosmos and see where we are actually situated.
Dharma means duty, in particular eternal service nature.
It is about what we do, what we stand for,
what we practice and what we share.